I encourage every member within the body of Christ to read The Holy Bible also known as The Word of God on a daily basis. Without regularly reading it, people revert back to their old or former selves. It becomes evident in the way people think, talk, and act in life.

God's word is meant to help people to actually live the Christian life; learn and grow in a personal relationship; walk by faith and not by sight; learn and grow in new identity; learn and know specific purpose; gain knowledge about the Kingdom; receive personal revelation; and so much more.There are a variety of options in the goal to reading the Bible whether through personal devotionals, a Bible reading plan, Bible studies, and/or a combination of the different options. Every person needs to intentionally read God's word for your mind, your health, your life. Choose to learn and grow spiritually and otherwise. As a result, you will reap the benefits and be the best person that God has created, called, chosen you to be for His purpose and plan.(See Joshua 1:8; Isaiah 53; Jeremiah 29:11-13; Psalm 103:1-5; Matthew 4:4; John 19; Acts 1:8, 17:24-28; Romans 12:1-2; 3 John 2)
Copyright 2022 by Dawn Freeman. All Rights Reserved.
Posted by Dawn at 9:00 AM No comments:

"pray without ceasing," (1 Thessalonians 5:17, NKJV)
Pray throughout the day every day for...
The World
The Nation
The Church
The Persecuted
The Lost
The Sick
The Poor
The Homeless
The Unemployed
The Dying
The Deceived
The Enemy (of people's souls)
The Family
Individuals
Relatives
Friends
Colleagues
Co-workers
Neighbors
Ourselves
The point is --- there is always someone and/or something to pray about and for on a regular basis throughout every day.
"pray without ceasing," (1 Thessalonians 5:17, NKJV)
Copyright 2022 by Dawn Freeman. All Rights Reserved.
Posted by Dawn at 9:00 AM No comments:

"And we know that all things work together for good to those who love God, to those who are the called according to His purpose." (Romans 8:28, NKJV)

What stood out for you?

Read it again if necessary.

"And we know that all things work together for good to those who love God, to those who are the called according to His purpose." (Romans 8:28, NKJV)

Do you know what stood out to me?

"to those who love God"

So, does that mean... for those who do not know God and love Him... things will not work together for their good...? (pause)

Sure makes me think...

Copyright 2022 by Dawn Freeman. All Rights Reserved.
Posted by Dawn at 8:00 AM No comments:

Being Released From Quarantine 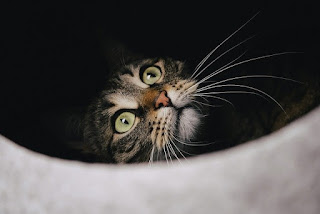 [Photo credit: Sa Ka miezekieze on Pixabay]
Is it safe to come out now?
A lot of us have been in quarantine for over a year until the last couple of months when restrictions have been lifted off more in certain parts of the country. Unfortunately with those restrictions being lifted off in some states; there have been more incidences of destruction, violence, and deaths which are all works of the devil and his demons. (See John 10:10) Sad to say, but it's true, that some people should have never been allowed out of quarantine at all.
I personally have been enjoying my time inside more, especially over the last few months. There's a lot less stress and more peace. Plus, I have had more time with my Father, Jesus, and the Holy Spirit to learn and grow more spiritually and otherwise. I have learned to cook and bake more often using a couple of home delivery services which include the recipes for the meals. One of the services even sends all of the ingredients including the seasonings, spices, condiments. It's a great way to be more creative in the kitchen as well as eat more healthy at times.
Now, I am wondering... Is it really safe for people to resume some of their normal activities in this dark world? Some of the places have been in some everyday establishments, businesses, companies where people have experienced violence, destruction, and death.
Father God, help us! Help us to be salt and light whenever and wherever we go out in this world. Put a hedge of protection over and around us always. Help us to love as you love, forgive as you forgive, and heal as you heal... In Jesus' name. Amen!
(Read Matthew 4:23-24, 5:13-16, 6:12, 14-15, 8:1-17, 22:37-40; 1 Thessalonians 5:16-18; James 5:14-16; 1 Peter 2:24; 3 John 2)
Copyright 2021 by Dawn Freeman. All Rights Reserved.
Posted by Dawn at 2:33 AM No comments:

God desires to have a relationship with all people. We are already made in His image. He wants all of us to personally know Him and love Him though. (Read Genesis 1:26-27)

If you haven't first believed in Jesus Christ for your eternal salvation, then repent of all your sin. Ask God to forgive you of all sin once and for all. Then, believe and receive the free gift of salvation that Jesus paid for you on the cross over 2000 years ago. (Read Isaiah 53; John 3:16; Romans 3:23, 6:23, 10:8-10)

For those who are already His children, He desires us to really come to know Him in a deeper and more intimate relationship. He knows us and our hearts. We can share our innermost thoughts and feelings with Him. He already knows us and them. We can be completely open and honest with Him. It doesn't change Him nor His nature. However, it can change our personal relationship with Him for the better. (See 1 Samuel 16:7; James 4:8a)
By daily spending time with Him, we become more like His only begotten Son, Jesus. That time includes seeking Him, His face, His kingdom, His righteousness. We can learn more about Him not only in His word but through experience with Him in life. Plus, by praying with Him, we not only communicate with Him but agree with Him and His will. (See Matthew 6:33, 18:19; Romans 8:29; 2 Corinthians 3:18; James 1:2-5; 1 Thessalonians 5:17; 1 John 5:14-15)
Ultimately, He is the only one who informs us about our physical and spiritual identity as well as our specific purpose in His overall plan.
(Read Joshua 1:8; Jeremiah 29:11-14; Psalm 139; Matthew 4:4; Romans 12:1-2)
Copyright 2021 by Dawn Freeman. All rights reserved.
Posted by Dawn at 2:41 PM 2 comments:

When Jesus found out about His cousin, John the Baptist, being beheaded from His disciples; He left from there by boat to a deserted place by Himself. However, the multitudes heard and followed Him on foot from their cities. When Jesus saw a great multitude, He was moved with compassion for them. He healed their sick!

The disciples told Jesus they needed to send them away to get some food since it was late at their deserted place. Jesus said otherwise though. He told them the multitudes didn't need to go away and told the disciples to give them some food.

They all ate and filled up. Afterward, they took up 12 baskets full of fragments left. They fed more than 5,000 including women and children that day.

When Jesus received bad news about His cousin, He went off by Himself. It didn't last long though. He discovered people who needed Him. Consequently, He was able to meet their needs including feeding the multitudes and healing their sick. He did good!

When something bad happens in our lives and/or in this world, we can also find people in our path who need us to do good for them.

I have had the opportunity to speak the truth in love to people and pray for people on a couple of occasions while at a local hospital in recent months.  We can all take the opportunity to help, support, encourage, minister to other people during this difficult time in the world.  (See Matthew 18:19; Ephesians 4:15)